Australian Bureau of Agricultural and Resource Economics and Sciences

A crude analysis of Australian Bureau of Agricultural and Resource Economics and Sciences (ABARE) ‘sugar availability’ data has led some to believe that Australians have been consuming more sugar since the early 1980’s and that this is the main reason behind the current overweight and obesity epidemic in this Australia.

There are many flaws with this argument:

2) ‘Sugar availability’ data suggests that Australians were consuming approximately the same amount in the early-to-mid 1970’s as they are now. If the economists hypothesis about sugars and overweight/obesity was true, then based on his ‘sugar availability’ analysis, there would have been an approximately equal number of overweight/obese people living in this nation in the early-to-mid 1970’s as there is now. However, rates of overweight and obesity more than doubled over the same period. 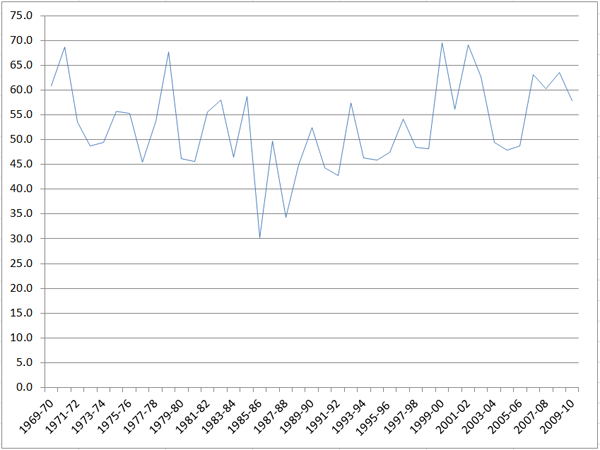 3) ‘Sugar availability’ is a crude measure and does not take into account changes in Australia’s population structure over the past few decades. The proportion of adults living in Australia has increased from 2/3 to 3/4 of the total population from the early 1970's until now, and as a population we are significantly taller (and heavier). Therefore sugar availability per kg body weight is even less than the crude analysis suggests.

4) ‘Sugar availability’ data are at odds with a large body of published scientific evidence. For example, the current Dietary Guidelines for Australians quote the Australian Bureau of Statistics apparent consumption data and notes the declining per capita consumption since World War 2 (page 175):

"Apparent consumption has fallen by about 15 per cent from prewar levels, or by 23 per cent from the post–World War 2 peak reached in 1948"

Furthermore, Table 1.9.6 (page 180) clearly shows that the percentage of total energy from sugar decreased or remained constant between 1983 and 1995 in Australian adults.

5) Australians are drinking more water and diet drinks and less sugar sweetened beverages, and many companies have reduced the sugar content of those beverages. The total amount of sugars from Sugar Sweetened Beverages (SSBs) has decreased since the mid 1990’s in Australia and Australians are replacing SSBs with bottled waters, non-nutritively sweetened (diet) beverages and reduced sugar alternatives. 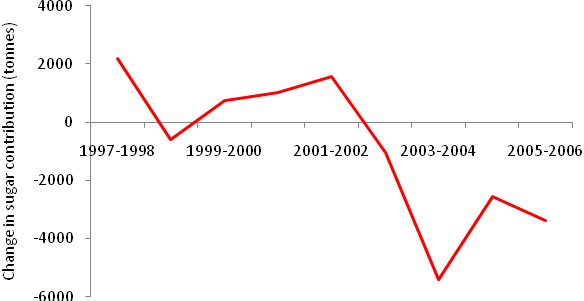 1. The data are driven by Australian raw sugar production and exports, and therefore overstate refined sugar usage by 8.7 %. Why? Because in the refining process, raw sugar loses around 8.7% of its weight, as water and various impurities are discarded as steam and molasses. By comparison, sugar in ABS’ series is based on refined sugar total usage.

3. It understates consumption by disregarding imports of refined sugar into Australia.

4. It disregards imports and exports of sugar-containing products for Australia.